On shifting Sand by Allison Pittman Long before anyone would christen it “The Dust Bowl,” Nola Merrill senses the destruction. She’s been drying up bit by bit since the day her mother died, leaving her to be raised by a father who withholds his affection the way God keeps a grip on the Oklahoma rain. A hasty marriage to Russ, a young preacher, didn’t bring the escape she desired. Now, twelve years later with two children to raise, new seeds of dissatisfaction take root.

When Jim, a mysterious drifter and long-lost friend from her husband’s past, takes refuge in their home, Nola slowly springs to life under his attentions until a single, reckless encounter brings her to commit the ultimate betrayal of her marriage. For months Nola withers in the wake of the sin she so desperately tries to bury. Guilt and shame consume her physically and spiritually, until an opportunity arises that will bring the family far from the drought and dust of Oklahoma. Or so she thinks. As the storms follow, she is consumed with the burden of her sin and confesses all, hoping to find Russ’s love strong enough to stand the test.

I have loved every Allison Pittman book I have read and this one is no exception. Whenever I see she has a new book coming I get so excited to get it and read it.  I will say this book is a bit different that her previous books but in good ways. It has shown she can develop and grow as a writer and so much more.

On Shifting Sands tells a great story of blame, sin and forgiveness set during the Dust bowl in the 1930's.  I really enjoyed the setting as it was new to me and not a time of history I knew as much about.  I liked Nora story and found it easy to follow along and had a hard time putting the book down.

To all fans of Allison Pittman please go and read this story and those that have never read her books are missing out.

* I received this book through the Tyndale Blog Network. Thank you.
Posted by Jen at 1:28 PM 1 comment:

The Legend of the Easter Robin Children's Picture Book

This newly illustrated edition of The Legend of the Easter Robin, written by Dandi Daley Mackall and illustrated by Richard Cowdrey, renews the wonder and charm of the timeless tale that explores the symbol of the robin and its connection to Easter.

The Legend of the Easter Robin brings beautifully illustrated pages and a sweet story that will make it a great addition to any book case. It was nice to read a book that is not centered on the Easter bunny and something that shares a good lesson that we all need to be reminded of at times. Overall all I highly recommend this book and look forward to picking up more book from this author/illustrator team.

*I received this book from Book Look Bloggers for the purpose of this review.
Posted by Jen at 9:28 AM No comments:

In a desperate time, can Neva find forgiveness for a grievous wrong—and make room for hope?

Neva Shilling has a heavy load of responsibility while her husband travels to neighboring communities and sells items from his wagon. In his absence, she faithfully runs the Shilling Mercantile, working to keep their business strong as the Depression takes its toll, and caring for their twins.

When a wagon pulls up after supper, Neva and her children rush out—and into the presence of the deputy driving a wagon carrying three young children. The deputy shocks her with the news that Warren and his wife have died, insisting it was their last request that the three children go live with “Aunt Neva.”

Neva’s heart is shattered as she realizes that Warren’s month-long travels were excuses for visits with his secret family. She wants nothing more than to forget Warren, but can she abandon these innocent children to an orphanage? Yet if she takes them in, will she ever be able to see them as more than evidence of her husband’s betrayal and love them the way God does?

I just love Kim Vogel Sawyer's books, read many over the years, and this one was easily a favorite. I really enjoyed the setting and the characters and was very sad when the book ended.
Kim weaved God's love and message very well throughout the story. I loved how Neva trusted God no matter the trials she faced and how she pushed through. Not everyone is dealt an easy life but that doesn't mean that good can't come from it and that God knows what He is doing.

Anyone that has read Kim's books before or new to her should pick this book up and enjoy it like I have!

*I received this book for the purpose of this review. Thank you!
Posted by Jen at 9:09 PM No comments:

A Refuge at Highland Hall 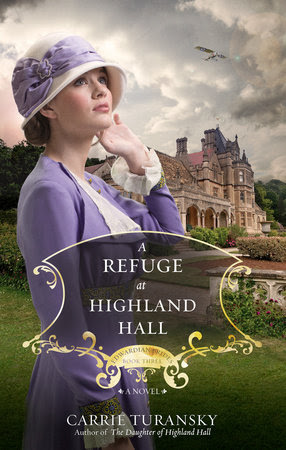 The Great War shakes the world of a spirited young woman and the brave British pilot she loves, taking her from London to her family’s magnificent country estate, and sending him into the war-torn skies over France.


Penny Ramsey has always considered Highland Hall her home, but when Britain becomes involved in World War One she travels to London to assist her sister Kate with the eight orphan children she and her husband Jon have taken into their home. Doing her part for the war effort takes priority over Penny’s dreams of romance until she meets Alex Goodwin, a Royal Naval Air Service pilot in training.

Alex is determined to prove his worth and do his part to defend his country. Knowing he is heading off for the dangerous assignment of chasing Zeppelins across the front line in France, he feels it’s unwise to form any romantic attachments. But he can’t help admiring the pretty, warmhearted Penny and wondering what it would be like to find her waiting when he returns home from the war.

Carrie Turansky has done it again! I have loved every book in this series and each one has gotten better and better. This is a must read series for anyone that loves historical romance fiction but do your self a favor and read them in order!

I am very sad that this series is over since it was so fantastic, its great to have a conclusion but sad at the same time.  I loved all the twists and turns and the WWI setting and found this to be a page turner from page one.

I am looking forward to see what Carrie Turansky comes out with next since I am sure it will be great!

*I received this book from blogging for books for the purpose of this review.
Posted by Jen at 12:34 PM 1 comment:

All Aboard the Ark Board Book

All Aboard the Ark pairs simple rhyming text with charming watercolor illustrations in this delightful board book perfect for little ones.

I love the illustrations of this book alot but found the rest of the book to be just so so. It doesn't really tell the story of Noah and the Ark but it is more telling about what animals did on the ark which ends up being very unrealistic. The concept is cute but I wished they didn't try and have the connection to a well known bible story. I did like the rhyming of the book. In the end its a cute book geared at 2 and under but not a good source of telling the story of Noah.

*I received this book from book look bloggers for the purpose of this review. Thank you.
Posted by Jen at 2:57 PM No comments:

Secrets she Kept by Cathy Cohlke 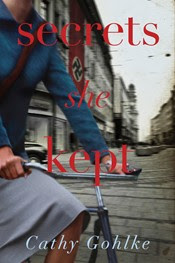 All her life, Hannah Sterling longed for a close relationship with her estranged mother. Following Lieselotte’s death, Hannah determines to unlock the secrets of her mother’s mysterious past and is shocked to discover a grandfather living in Germany.

Thirty years earlier, Lieselotte’s father is quickly ascending the ranks of the Nazi party, and a proper marriage for his daughter could help advance his career. Lieselotte is in love—but her beloved Lukas is far from an ideal match, as he secretly works against the Reich. Yet Lieselotte never imagined how far her father would go to ensure her cooperation.

Both Hannah’s and Lieselotte’s stories unfold as Hannah travels to Germany to meet her grandfather, who is hiding wartimes secrets of his own. Longing for connection, yet shaken by all she uncovers, Hannah must decide if she can atone for her family’s tragic past and how their legacy will shape her future.

If you have read a Cathy Gohlke book in the past you know how powerful her stories are and how well researched they are too, well her newest book lives up to it and so much more. I think this is easily the best book I have read from her. I was so sad when the story ended since I was invested in it. I just loved the mix of the past and the present and Cathy did an amazing job at weaving them together. Lieselotte's story was just so good and sad but kept me turning the pages late into the night. All the twists and turns kept the story alive and Cathy did an amazing job at painting the scene and making it seem like you were right in the story.

Lovers of historical fiction and WWII also will just love this book. If you have never read a Cathy Gohlke book then grab this one and find out what makes this author so good!

*I received this book through Tyndale Blog Network for the purpose of this review.

The Princess Parables come to life through age-appropriate puzzles, activity pages, and 50 colorful and reusable stickers in the friendly and fun Princess Grace’s Sticker and Activity Book featuring Grace, her four princess sisters, and their friends.

Join Grace and her sisters in some creative and interactive fun with 16 pages of stickers and activities that are sure to please, featuring her father the king and her special animal friend Poppy the kitten.

This is a very cute sticker book for little girls and very affordable for parents ($3.99). Each page is beautifully illustrated and their are a ton of stickers. I liked that their is more than just stickers but also activities. This would make a great book for car/plane travel or when you need things that are easy to take with you to entertain them with. There are others in this series and I can easily see girls wanting more.

*I received this book through BookLook Bloggers for the purpose of this review.
Posted by Jen at 8:28 AM 2 comments:

Jen
I love reading and I am always looking for a new good book to read.